Samuel Barbour (1860 – 3 June 1938) was an Australian chemist, photographer and X-ray pioneer in the colony of South Australia. In Australia, the medical men of the day took a slow approach in the adoption of the new science that involved X-rays. Many of the early demonstrations were made by investigators outside the medical field. Upon examination of the initial investigators, several key factors were common. The individuals had already either been experimenting along similar lines to Wilhelm Röntgen with Crookes tubes and such, the physicists or scientists, or were actively associated with electrical work, the electricians, which made them particularly receptive to the technical appeal of the new science of X-rays. Records of the events reveal that among the medical men who witnessed the first images produced as radiographs, a rather small number had any great desire to employ X-rays directly in their own medical practice.

After the early investigative work of Thomas Ranken Lyle, William Henry Bragg, Joseph Patrick Slattery, and others, almost all medical men were satisfied with soliciting the services of the external X-ray man when necessity arose for skiagraphs to be produced. As the utilization of X-rays became more acceptable, the involvement of electricians began to decline. As the hospitals started to be equipped with X-ray apparatus and installations under the care of radiologists and radiographers, the medical men began to accept the eventuality of the new technology. Up to this point, the private experimenters and investigators continued to be the initiators of new ideas for the medical profession in this new field. Provided by Wikipedia
Showing 1 - 1 results of 1 for search 'Barbour, Samuel', query time: 0.02s 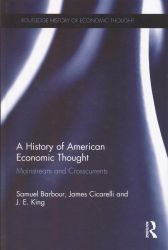 A history of American economic thought : mainstream and crosscurrents