| education = B.A., University of Virginia, 1993
M.L.A., Harvard University, 1997 | occupation = Landscape architect }} Kate Orff, RLA, FASLA, is the founding principal of SCAPE, a design-driven landscape architecture and urban design studio based in New York. She also is the director the Urban Design Program (MSAUD) at Columbia University's Graduate School of Architecture, Planning and Preservation and co-director of the Center for Resilient Cities and Landscapes. Orff is the first landscape architect to receive a MacArthur Fellowship.

Orff's work focuses on retooling the practice of landscape architecture relative to uncertainty of climate change and fostering social life which she has explored through publications, activism, research, and projects. She is known for leading complex, creative, and collaborative work processes that advance broad environmental and social prerogatives.

She has designed projects across the United States and internationally. She lectures widely in the U.S. and abroad on the topic of urban landscape and new paradigms of thinking, collaborating and designing for the Anthropocene Era. Orff is also listed on TED talks, the Architectural League NY, Aperture Foundation, and WNYC. Orff also teaches interdisciplinary seminars and design studios at Columbia University.

She was listed first by ''Elle Magazine'' in 2011 as one of nine women involved as "fixers" for mankind.

She is the director of the Urban Design Program at Columbia University Graduate School of Architecture, Planning and Preservation, where she is founder and co-director of the Urban Landscape Lab. According to the Urban Landscape Lab biographical information her office, SCAPE, has won local and national design awards. She was named a Dwell Magazine ‘Design Leader’ and H&G's 50 For the Future of Design. Provided by Wikipedia
Showing 1 - 1 results of 1 for search 'Orff, Kate, 1971-', query time: 0.04s Refine Results 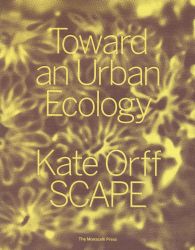 Toward an urban ecology