Kratochvíl was born on 10 February 1959 in Prague. He studied at Charles University in Prague, earning a master's degree in 1983 and a Ph.D. in 1987; his dissertation, supervised by Jaroslav Nešetřil, combined graph theory with coding theory. He remained at Charles University as a faculty member, earned his habilitation in 1995, and was promoted to full professor in 2003. From 2003 to 2011 he chaired the department of applied mathematics at Charles University, and since 2012 he has been dean of the Faculty of Mathematics and Physics there.

Kratochvíl was the program chair and organizer of the 7th International Symposium on Graph Drawing, in 1999. From 2002 to 2010 he was president of the Czech Mathematical Society. Provided by Wikipedia
Showing 1 - 9 results of 9 for search 'Kratochvíl, Jan, 1959-', query time: 0.04s Refine Results 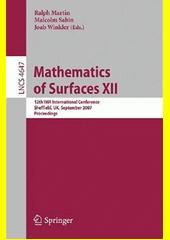