Athanasius Kircher, S.J. (sometimes erroneously spelled Kirchner; , 2 May 1602 – 28 November 1680) was a German Jesuit scholar and polymath who published around 40 major works, most notably in the fields of comparative religion, geology, and medicine. Kircher has been compared to fellow Jesuit Roger Boscovich and to Leonardo da Vinci for his enormous range of interests, and has been honoured with the title "Master of a Hundred Arts". He taught for more than forty years at the Roman College, where he set up a wunderkammer. A resurgence of interest in Kircher has occurred within the scholarly community in recent decades.

Kircher claimed to have deciphered the hieroglyphic writing of the ancient Egyptian language, but most of his assumptions and translations in this field were later found to be incorrect. He did, however, correctly establish the link between the ancient Egyptian and the Coptic languages, and some commentators regard him as the founder of Egyptology. Kircher was also fascinated with Sinology and wrote an encyclopedia of China, in which he noted the early presence there of Nestorian Christians while also attempting to establish links with Egypt and Christianity.

Kircher's work in geology included studies of volcanoes and fossils. One of the first people to observe microbes through a microscope, Kircher was ahead of his time in proposing that the plague was caused by an infectious microorganism and in suggesting effective measures to prevent the spread of the disease. Kircher also displayed a keen interest in technology and mechanical inventions; inventions attributed to him include a magnetic clock, various automatons and the first megaphone. The invention of the magic lantern is often misattributed to Kircher, although he did conduct a study of the principles involved in his ''Ars Magna Lucis et Umbrae''.

A scientific star in his day, towards the end of his life he was eclipsed by the rationalism of René Descartes and others. In the late 20th century, however, the aesthetic qualities of his work again began to be appreciated. One modern scholar, Alan Cutler, described Kircher as "a giant among seventeenth-century scholars", and "one of the last thinkers who could rightfully claim all knowledge as his domain". Another scholar, Edward W. Schmidt, referred to Kircher as "the last Renaissance man". In ''A Man of Misconceptions,'' his 2012 book about Kircher, John Glassie writes that while "many of Kircher's actual ideas today seem wildly off-base, if not simply bizarre," he was "a champion of wonder, a man of awe-inspiring erudition and inventiveness," whose work was read "by the smartest minds of the time." Provided by Wikipedia
Showing 1 - 4 results of 4 for search 'Kircher, Athanasius', query time: 0.07s 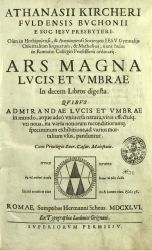 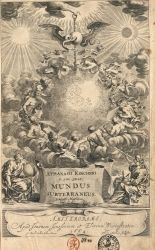 Saved in:
Search Tools: Get RSS Feed — Email this Search — Save Search