During his playing career he usually operated as a forward or midfielder, and was most noted for two spells at Manchester United, but he also played for Barcelona and Bayern Munich, as well as the English clubs Chelsea, Southampton, Everton and finally Blackburn Rovers. He also made 72 appearances for Wales scoring 16 goals. He retired from playing in 2002. He won a host of winners' medals during his playing career, including two Premier League titles, four FA Cups, three League Cups and two European Cup Winners' Cups. He also collected an FA Cup runners-up medal and a League Cup runners-up medal. Hughes was the first player to win the PFA Players' Player of the Year award twice, in 1989 and 1991.

His reign as Wales manager was his first managerial post; he was appointed in 1999 and remained in the role until 2004. He failed to qualify for a World Cup or European Championship during his five years in charge, although his reign coincided with a marked improvement in results; he came particularly close to securing European Championship qualification in 2004. Hughes then spent four years in charge of Blackburn, guiding them to sixth place in 2005–06. He took charge of Manchester City in June 2008 for a year and a half before spending the 2010–11 season at Fulham. He joined Queens Park Rangers in January 2012, helping them retain their Premier League status in 2011–12. Despite some high-profile signings in the summer of 2012, QPR began the 2012–13 season in very poor form, and Hughes was dismissed on 23 November 2012.

Hughes was appointed manager of Stoke City on 30 May 2013. He guided the club to three consecutive ninth-place Premier League finishes in 2013–14, 2014–15 and 2015–16; however progress at Stoke stalled in the 2016–17 season, with the club finishing 13th in the table. Following a poor start to the 2017–18 season, with the club in the relegation zone heading into the new year, he was dismissed by Stoke on 6 January 2018, hours after an FA Cup third round exit to League Two side Coventry City. He was appointed manager of fellow struggling side Southampton on 14 March 2018, signing a contract until the end of the season, with the Saints sat one point above his former club Stoke in 17th place at the time of his appointment. He guided the club to safety at the end of the 2017–18 season, but was dismissed in December 2018 with the club at 18th in the table. Provided by Wikipedia
Showing 1 - 2 results of 2 for search 'Hughes, Mark', query time: 0.03s Refine Results 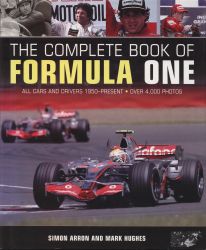 The complete book of Formula One