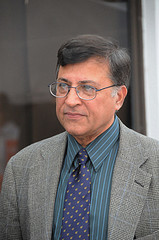 Pervez Amirali Hoodbhoy (Urdu: ; born 11 July 1950) is a Pakistani nuclear physicist and activist who serves as ''[http://www.fccollege.edu.pk/member/dr-pervez-amirali-hoodbhoy/ Zohra and ZZ Ahmed Foundation distinguished professor]'' at the Forman Christian College and previously taught physics at the Quaid-e-Azam University. Hoodbhoy is also a prominent activist in particular concerned with promotion of freedom of speech, secularism, scientific temper and education in Pakistan.

Born and raised in Karachi, Hoodbhoy studied at the Massachusetts Institute of Technology for nine years, where he received degrees in electrical engineering, mathematics and solid-state physics, eventually leading to a PhD in nuclear physics. In 1981, Hoodbhoy went on to conduct post-doctoral research at the University of Washington, before leaving to serve as a visiting professor at the Carnegie Mellon University in 1985. While still a professor at the Quaid-e-Azam University, Hoodbhoy worked as a guest scientist at the International Centre for Theoretical Physics from 1986 to 1994. He remained with the Quaid-e-Azam University until 2010, throughout which he held visiting professorships at MIT, University of Maryland and Stanford Linear Collider.

In 2011, Hoodbhoy joined LUMS while also working as a researcher with Princeton University and as copa columnist with the ''Express Tribune''. His contract with LUMS was terminated in 2013 which resulted in a controversy. He is a sponsor of the ''Bulletin of the Atomic Scientists'', and a member of the monitoring panel on terrorism of the World Federation of Scientists. Hoodbhoy has won several awards including the Abdus Salam Prize for Mathematics (1984); the Kalinga Prize for the popularization of science (2003); the Burton Award (2010) from the American Physical Society. In 2011, he was included in the list of 100 most influential global thinkers by ''Foreign Policy''. In 2013, he was made a member of the UN Secretary General's Advisory Board on Disarmament.

Hoodbhoy remains one of Pakistan's most prominent academics. He is the author of ''Islam and Science: Religious Orthodoxy and the Battle for Rationality'' He is the head of ''Mashal'' Books in Lahore, which claims to make "a major translation effort to produce books in Urdu that promote modern thought, human rights, and emancipation of women". Hoodbhoy has written for ''Project Syndicate'', ''DAWN'', ''The New York Times'' and ''The Express Tribune''. Hoodbhoy is generally considered one of the most vocal, progressive and liberal members of the Pakistani intelligentsia. His daughter, Alia Amirali, is also a well-known feminist and political activist. Provided by Wikipedia
Showing 1 - 1 results of 1 for search 'Hoodbhoy, Pervez', query time: 0.04s Refine Results Measuring the QCD coupling constant (alfa)s inside a nucleus