Stanisław II Augustus; ''Stanisław'' in isolation is pronounced .}} (also Stanisław August Poniatowski;.}} born Stanisław Antoni Poniatowski;.}} 17 January 1732 – 12 February 1798), was King of Poland and Grand Duke of Lithuania from 1764 to 1795, and the last monarch of the Polish–Lithuanian Commonwealth. A great patron of the arts and sciences, he initiated progressive reforms, but is also remembered as the king whose election was marred by foreign intervention. A controversial figure in Poland's history, he is criticized primarily for his failure to stand against and prevent the partitions, which led to the destruction of the Polish state.

Born into wealthy Polish aristocracy, Poniatowski arrived as a diplomat at the Russian imperial court in Saint Petersburg in 1755 and became romantically involved with the future empress Catherine the Great. With her connivance, he was elected King of Poland by the Polish nobles in 1764 following the death of Augustus III. Contrary to expectations, Poniatowski attempted to reform and strengthen the large but ailing Commonwealth. His efforts were met with external opposition from neighbouring Prussia, Russia and Austria, all committed to keeping the Commonwealth weak. From within he was opposed by conservative interests, which saw the reforms as a threat to their traditional liberties and privileges granted centuries earlier.

The defining crisis of his early reign was the War of the Bar Confederation (1768–1772) that led to the First Partition of Poland (1772). The later part of his reign saw reforms wrought by the Great Sejm (1788–1792) and the Constitution of 3 May 1791. These reforms were overthrown by the 1792 Targowica Confederation and by the Polish–Russian War of 1792, leading directly to the Second Partition of Poland (1793), the Kościuszko Uprising (1794) and the final and Third Partition of Poland (1795), marking the end of the Commonwealth. Stripped of all meaningful power, Poniatowski abdicated in November 1795 and spent the last years of his life as a captive in Saint Petersburg's Marble Palace. Provided by Wikipedia
Showing 1 - 1 results of 1 for search 'Grabowska, Izabela', query time: 0.06s Refine Results 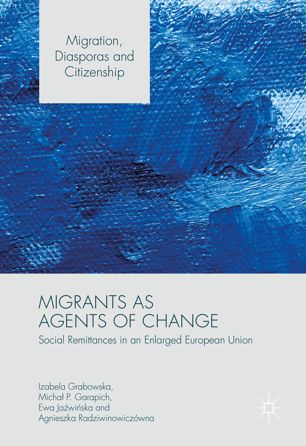 Migrants as Agents of Change : Social Remittances in an Enlarged European Union